Direction of the serie Regulation & Compliance, JoRC and Bruylant 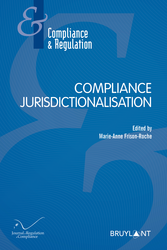 📅  This book is based on the 2021 colloquia organised by the Journal of Regulation & Compliance (JoRC) and its Universities partners.

► This book in few words: Sanctions, controls, appeals, deals: judges and lawyers are everywhere in the Compliance mechanisms, creating unprecedented situations, sometimes without a solution yet available.  Even though Compliance was designed to avoid the judge and produce security by avoiding conflict. This jurisdictionalisation is therefore new. Forcing companies to prosecute and judge, a constrained role, perhaps against their nature. Leading to the adaptation of major procedural principles, with difficulty. Confronting arbitration with new perspectives. Putting the judge at heart, in mechanisms designed so that he is not there. How in practice to organize these opposites and anticipate the solutions? This is the challenge taken up by this book.

► Read the presentation of the other books of this Collection:

► Book Summary: There have always been Judges and Lawyers in Compliance Law, in particular because this branch of Law is an extension of Regulatory Law in which they have a core place. This results from the fact that the decisions taken in respect of Compliance are contestable in Court, including Arbitration, those issued by the Company, such as those of States or Authorities, the Judge in turn becoming what Compliance Law is effective.

📝 ​Frison-Roche, M.-A., Reinforce the Judge and the Attorney to impose Compliance Law as a Common Good

I. THE COMPANY ESTABLISHED PROSECUTOR AND JUDGE OF ITSELF BY COMPLIANCE LAW

📝 Granier, C., The Jurisprudence of the Compagnies established as prosecutors and Judges of themselves by Compliance Law

📝 Coulon, J.-M., How a company works to make Compliance Law a reality: the example of the construction sector

📝 Lapp, Ch., How a Company works to make Compliance Law a reality: the statues of processes

📝 Augagneur, L.-M., Reputational Treatment by and on the platforms

📝 Bruno, A., The way in which compagnies in the banking sector organize themselves and behave in order to fulfill their role as "prosecutor and judges of themselves"

📝 Siproudhis, J.-B., The transfer of responsibility from the regulator and the judge to the company: demonstration by the whistleblowing mechanism

📝Frison-Roche, M.-A., The Judge-Judged ; articulating words and things in the face of the impossible conflict of interests

📝 Lapp, Ch., How a Company works to make Compliance Law a reality: the statues of processes

📝 Bavitot, A., Shaping the company through negotiated Criminal Justice Agreements

📝Sillaman, B., Privilege and Cooperation: Procedural Lessons Learned from the U.S. for Global Application

📝 Scemla, S.& Paillot, D., The supervisory Authorities face difficulties to apprehend the Rights of the Defense

📝Linden, A., Motivation and publicity of the decisions of the restricted committee of the French Personal Data Protection Commission (Commission nationale de l'informatique et des libertés-CNIL) in a compliance perspective

📝 Schiller, S., A single judge in the event of an international breach of compliance obligations?

📝 Kleiman, E., The goals of compliance confronted to arbitration and its actors

📝 ​Audit, M., The position of the arbitrator in matters of Compliance

IV. THE JUDGE IN COMPLIANCE LAW

📝Douvreleur, O., Compliance and Judge ruling only on points of Law

📝Wennerström, E., Some Reflections on Compliance and the European Court of Human Rights 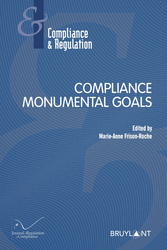 ► This book in a few words: Seize Compliance by its mind: its Monumental Goals. The notion of "monumental goals" of Compliance was proposed in 2016 by Marie-Anne Frison-Roche📎!footnote-1901. It has become explicit in the texts and the resolution of cases, for example to fight against climate change, make human beings effectively equal, force to be extraterritorially vigilant about suppliers.

Compliance Monumental Goals are targeted ex ante by regulations, contracts, CSR, and international treaties. Creating an alliance between business and political authorities, aiming for a new form of sovereignty. The presence in litigation of these Monumental Goals of global dimension renews the responsibilities and the Judge office. Describing and conceiving these Monumental Goals makes it possible to anticipate Compliance Law, which is more powerful every day.

📕 In parallel, a book in French Les Buts Monumentaux de la Compliance, is published in the collection "Régulations & Compliance" co-published by the Journal of Regulation & Compliance (JoRC) and Dalloz.

📅 This book follows a cycle of colloquia 2021 organized by the Journal of Regulation & Compliance (JoRC) and its universities partners.

📚   This book is inserted in this series created by Marie-Anne Frison-Roche for developing Compliance Law.

📚   read the presentations of the other books of this Compliance Series :  :

► Read the presentations of the other books on Compliance in this collection:

► General construction of the book :

From there, the book unfolds in 5 titles.

A second Title aims to measure how the Monumental Goals are questioned by a crisis situation, for example in a health situation, but not in that example, if they aggravate it and must be discarded, or if, on the contrary, they are exactly conceived for this hypothesis. of crisis, risks, catastrophes and that it is advisable to exploit them, in particular in order, in this "test", to benefit from the alliance between the political authorities, public powers and crucial operators.

Once made explicit and tested, the Monumental Goals must find a sure way to be taken into account. This is why a third Title aims to measure in principle and in practice how the Proportionality method can help the integration of Compliance, thus giving a new dimension to the Law without dragging it into insecurity and illegitimate grabbing of powers.

But because Compliance Monumental Goals express a very great ambition, the question of a bearable, even beneficial relationship with the international competitiveness of companies, standards and systems must be opened. This is the object of the fourth Title.

► panorama of the book through the Table of Content and the summaries of some Articles:

PART I. THE VERY IDEA OF MONUMENTAL GOALS, THE BEATING HEART OF COMPLIANCE LAW

📝Le Fur, A.-V., Interest and “raison d’être” of the company: how do they fit with the Compliance Monumental Goals? ;

📝Maistre, R.-O.,  What monumental goals for the Regulator in a rapidly changing audiovisual and digital landscape? ;

📝Peicuti, C. et Beyssade, J.,The Feminization of Responsability positions in Companies as a Compliance Goal. Example of the banking sector ;

📝Petit, B., The Arrangement of the Monumental Goals of Labor Law: a Moving and Often Paradoxical Whole ;

📝Vaquieri, J.-F., The "Monumental Goals" perceived by the company. The example of Enedis.

📝Huglo, Ch., Under what conditions could Climate Law constitute a priority Monumental Goal?

PART II. IMPLEMENTATION OF COMPLIANCE MONUMENTAL GOALS IN ARTICULATION OF THE MAJOR PRINCIPLE OF PROPORTIONALITY

📝Bär-Bouyssière, B., Practical obstacles to the effective place of Proportionality in Compliance

📝Meziani, L., Proportionality in Compliance, the guarantee of public order in companies

📝Segonds, M., Compliance, Proportionality and Sanction. The example of the sanctions taken by the French Anticorruption Agency

📝Oumedjkane, A., Tehrani, A. et Idoux, P., Public Norms and Compliance in times of Crisis: Monumental Goals tested: Elements for a Problematic ;

📝Bonnet, J., The Crisis, an opportunity to seize Compliance as a Mode of Communication by Public Authorities ;

📝Frison-Roche, M.-A., Role and Place of Companies in the Creation and Effectiveness of Compliance Law in Crisis

📝Deffains, B., The economic challenge of international competitiveness of Compliance

📝Marty, F., The Case for Compliance Programs in International Competitiveness: A Competition Law and Economics Perspective

📝Frison-Roche, M.-A., Assessment of Whistleblowing, and the obligation of Vigilance

📝Pottier, S.,  In favour of European compliance, a vehicle of economic and political assertion 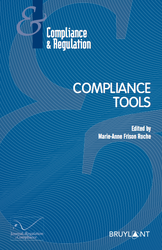 This book in English is the first title of this collection integrally dedicated to Compliance Law, in that it is the extension of Regulation Law.

📚  Read the titles of this series in English co-published by Bruylant.

📚   This collection in English is articulated with a collection co-published between the Journal of Regulation & Compliance and Dalloz.

📅   This book is published after a  cycle of colloquiums organised by the Journal of Regulation & Compliance (JoRC) and Partners Universities.

► General Presentation of the collective book: The political dimension of Compliance Law lies in the goals it aims to achieve. To achieve them, the concern for these goals is internalized in "crucial operators", which may be obliged to concretize "monumental goals" set by public authorities. These public bodies control the Ex Ante reorganization that this implies for these companies and sanction Ex Post the possible inadequacy of the companies, which have become transparent to this end. The effectiveness and efficiency of this internalization, without which the statement of these goals is worth nothing, is based on the Compliance tools that are deployed.

These appear to be very diverse but their substantial unity (topic which will be the subject of a forthcoming book) makes it possible to study the tools put in place from a unique perspective, by not isolating them in a particular branch of Law, Criminal law or International Law for example, but by measuring what is common to them, notably Anticipation, Trust, Commitment, Responsibility, Incentive, and so on. If the Compliance tools vary, it is rather not only according to the sectors, finance and banking appearing then as the advanced point of the general Compliance Law, for example in environmental matters, but also according to the countries and the cultures. It is in fact about them that legal cultures seem to oppose.

The book aims to understand these "tools" by going beyond the description of each instrument, for which we already have many monographs, for analyzing them through the issues of Risks, required Expertises, Training. Sovereignty claims, Incentives, mechanical aptitude of Technologies. It is through these themes that are analyzed by the authors, experts in the field, what we always want to understand better: Compliance Programs, Whistle blowing, Mapping, Sanctions, Extraterritoriality, etc.

Read the summary of the book.

Read the foreword, summarizing all the contributions.

Présentation of the book contributions:

📝Amico, Th., Compliance or the passage from ex post to ex ante: A Copernican revolution for the criminal lawyer?

📝Banck, A., The maturity of the Compliance tool’s user, first criterion of the choice of the salient tool

📝Calandri, L., Incentive(s) and Self-Regulation(s): which place for Compliance Law in the Audiovisual Sector?

📝Causse, H., Compliance Training: Through and Beyond Traditional Legal Training

📝Frison-Roche, M.-A., Describing, designing and correlating Compliance Tools to have a better use of it

📝Frison-Roche, M.-A., Building by Law the Unicity of Compliance Tools from the Definition of Compliance Law by its "Monumental Goals"

📝Frison-Roche, M.-A., Drawing up Risk Maps as an obligation and the paradox of the "Compliance risks" ​

📝 Frison-Roche, M.-A., Incentives and Compliance, a couple to propel

📝 Frison-Roche, M.-A., Resolving the contradiction between sanctions and incentives under the fire of Compliance Law

📝 Galland, M., The Regulator's Inspection of the Effectiveness of the Compliance Tools Implemented by the Company

📝 Granier, C., The Normative Originality of Compliance by Design

📝Guttierez-Crespin, A., Audit of Compliance Systems​

📝 Pailler, L., Technological Tools, Compliance by Design and GDPR: the Protection of Personal Data from Design

📝 Racine, J.-B., Geographical dominance in the choice and the use of Compliance Tools. Introductory remarks

📝 Roda, J.-C., Compliance by design in antitrust: between innovation and illusion

📝 Salah, M., Conception and Application of Compliance in Africa