Is the French legal system an asset or a handicap for the competitiveness of our companies and our territory? 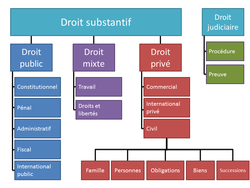 This working document served as a basis for a lecture given in French at the Académie des Sciences morales et politiques  (French Academy of Moral and Political Sciences) on September 25, 2017, in the cycle of conferences conducted under the presidency of Michel Pébereau,  Quelles réformes ? (What reforms?)

Consult the presentation (in French) of the conference cycle (2017).

It served as the basis for the publication of an article published  in French in 2018 in the book directed by Michel Pébereau Réformes et transformations (Reforms and transformations).

The question was formulated in these terms: "Is the French legal system an asset or a handicap for the competitiveness of our companies and our territory?". So it should be taken as it is. And to answer only by "asset" or "handicap" which, because these two words mirror each other, obliges to answering a binary question by "yes" or by "no". At last it is a very simple question : is French Law good or bad for Economy ?

However, this question is implicitly so vast and the answer to be given is so difficult. This question has given rise to so many answers, often vague as well as peremptory. Because the question itself is as wide as the available answers are diverse and crumbled, we are quickly tempted by dodging. it is easy. It would be enough to answer in a fun and caustic way, the question having given rise to many pikes, most often against French law, showing what would be its ridiculous inadequacy to serve the interests of the operators, this Law so old , so slow, so ignorant of the globalized realities, this French Law which speaks only French.

Or it would be enough to drown in the legal technique, words of experts, the question that gave rise to reports on the attractiveness of France through its Law which are full of reproaches, a flood of this literature so boring that it is called "gray", reports that follow the single-color books, green, then white, whose references fill the appendices with new reports that plead for a Law that would allow to think finally only in terms of transaction costs and incentives to innovation, of a Law which recognizes that its progress consists in being conceived only through the corridor of economic notions.

Or, one could say also that, everything being in everything, one could not take up the cause, that one should not answer so abruptly, that it would be better to debate and to debate again, to to be measured and balanced, we should not take sides, and that everyone is right about it, that the French legal system is an asset in this, and a handicap in that, opportunity in passing to build a two-part plan. So even lovers of form would be happy. A pretty construction fo a nice lesson ...

But we must prefer, in accordance with the principle of good faith, a childlike principle, but a profitable one, to analyze the terms of the question, to give ourselves the means of responding to it, in order to do it clearly.

After such a preliminary analysis of the terms of the question, it is adequate to adopt a method which consists, for each discipline at work, of not taking the ascendancy over the other (I). This judgment must be global, dealing with the Law as it is a system. When one reads the various works, they relate only to this or that mechanism, at best on this or that branch of Law, which ignores the fact that French law is a system (II). Yet it is good that as a system that French Law must be grasped, apprehend it not only by its strong signals, but also by its weak signals These can constitute the most valuable assets ( III). Moreover, it is fruitful to give full effect to the term so special and rarely valued that is the term "territory", placed in the question, a term so old and today so intriguing since "new territories" are offered to us: digital, Europe. And there, the French legal system, what can it bring, carrying then what one could call the French "glory", because the Law is like the Politics a discipline which carries "pretensions", for example that of building the Europe, for example Digital Europe (IV).

Because to a question, you have to answer. Otherwise, we stay in a sort of eternal conversation. But the "contradictory" is of interest only by its outcome, constituted by the judgment. In the question asked, it is implicitly two theses answers that oppose (and a choice between them): that of a French legal system that would be a "handicap" and that where it would constitute an "asset". As the question is closed, other qualifications are not proposed, and finally the more narrow and compelling a question is, the more interesting it is to force oneself to answer them.

The way is narrow: should we condemn the French legal system, joining all those who complain, or say that it is an asset? Having the strength to take a stand, is not it above all that is asked? Because the brutality of the question is his main interest, so foreign to the politeness of the old Law, which always finds some quality at everything but thinks at the same time always to blame, working to develop new answers to questions that were even not asked to improve the old laws, bringing nuances to the rules in the gray of the case law. This abrupt question puts the Law at the foot of the wall and forces it to come out of itself to meet the yardstick of other criteria: the criteria of economic efficiency.

If, faced with the assessment that will be formulated, the Law is an "asset for our companies and our territories", the French legal system will have saved its head and can remain; if Law appears as a "handicap", it will rise to the scaffold, that is to say be "reformed" in the military sense of the term. Appreciation  from it will result that, if the box "handicap" is checked, the benefits will be pocketed by those who already sense or see in the one who compared, the "French legal system", a kind of criminal- born who murdered our companies or / and our territories, or did not give them enough assistance. But if the box "trump" is preferably checked, the judgment will still be the asset of one who makes such an assessment because the judgment thus formulated will please both those who want French law as "effective" and be appreciated for what it must be: an instrument. Thus, the evaluator is constituted in fact by the legislator himself, the Parliament having to recopy the norm which is the "good" since it is efficient. This is clearly seen not only in the field of labor Law or the Law of Insolvency, but also and for example in the field of constitutional Law .

Marie Curie, who had both the strong character and unquestionable scientific spirit, said that there is a "childlike spirit" in the researcher's mind.

Although one may prefer to formulate the question rather than the answer, since it is the philosophical exercise par excellence. But the jurist is constrained by the question, especially if the legal logic to which Perelman devoted his work takes as a model the logic of the judge, a character who does not quite freely choose his questions: it is the parties who express, even if it enters into its office a part of reformulation of these.

On the opposite idea of ​​a "golden age" of Law, especially French Law, which would be that of the 1804 Code Napoléon, moment of perfection, a kind of "civil Constitution", v. Carbonnier, Le Code civil (The Civil Code), 1986. Written in French, this article shows that the "Civil Code" is a "place of memory" (lieu de mémoire) of France, but that this Code is also a "transactional work" between all the stories that converged there.